The Pope joining Instagram caused a social media stir, but his holiness’s account has been caught doing something that isn’t so holy.

Instagram model Natalia Gabribotto got the surprise of her life when she was looking at the likes on a picture she posted of herself posing in a schoolgirl outfit.

To her surprise, she saw that the Pope’s account had liked it. 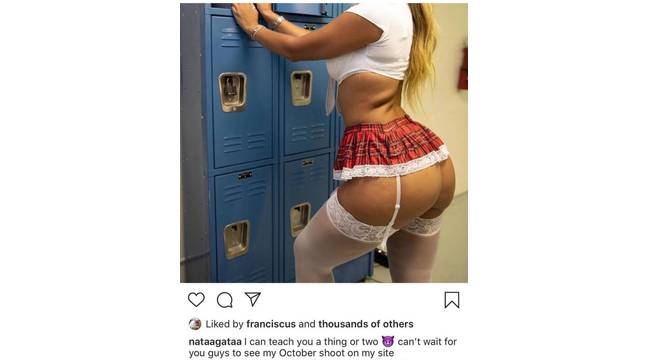 She later told Barstool Sports: “My mum may hate my ass pics but the Pope be double-tapping.”

Pope Francis has been hailed for being more progressive than other Popes recently.

In the documentary Francesco, he said:

“Homosexual people have the right to be in a family. They are children of God. Nobody should be thrown out or be made miserable over it.

“What we have to have is a civil union law; that way they are legally covered.”

Mom Makes $4,000 a Month Selling Videos Of Herself Farting

Liam Bond - November 11, 2020 0
He has big boots to fill, but Anderson Cooper is in talks to replace Alex the late Trebek as the new host of Jeopardy! Alex...

Joe Biden Sends Message To Trump With His Own Hat

The Transition to the Biden Administration Just Got Messier

﻿Donald Trump has spoken out after he became the first President in US history to be impeached twice. The President has been banned from...
Read more

People of color make up almost half of Joe Biden's transition team, and the majority of them are women. Biden has always said that he...
Read more

Mom Makes $4,000 a Month Selling Videos Of Herself Farting

It's time to get a new career. Because now you can make a living from farting on video for the paying public to watch....
Read more

In 2021, no one is safe from trolls. Especially not the rich and famous. Billie Eilish found this out when the singing sensation posted...
Read more

A woman being interviewed on UK news shamelessly had a sex toy in the background of her shot. Yvette Amos was speaking to the...
Read more

All Rights Reserved © 2020 - Designed By WEBCUBE